The President of the Coconut Federation of Ghana (COCOFEG), Mr Patrick Ndabiah, has called on members of the federation to remain calm over a recent video purporting to show a variety of coconut fruit containing deep red liquid.

Mr. Ndabiah, in a message to Federation members, dismissed the publication, tagging it as “fake news”.

He stated that the leadership of the organization is treating the matter with the urgency and seriousness it deserves to preserve the image of Ghana on the international coconut market.

Mr. Ndabiah commended the President of Ghana, Nana Addo Dankwa Akufo-Addo, for including coconut in the National Tree Crop Development Authority (NTCDA). NTCDA is mandated to develop and regulate the production, processing, marketing, and export of coconut and other selected tree crops.

He said, the Coconut Federation, under the NTCDA is thus well-positioned to accelerate Ghana’s position to earn a significant share of the estimated $15 billion global coconut industry by 2024, through business development, employment creation and livelihood opportunities along the Ghanaian coconut value chain.

The Second National Vice President of the federation, Kwaku Boateng, warned the public to desist from publishing false information about Ghanaian products. 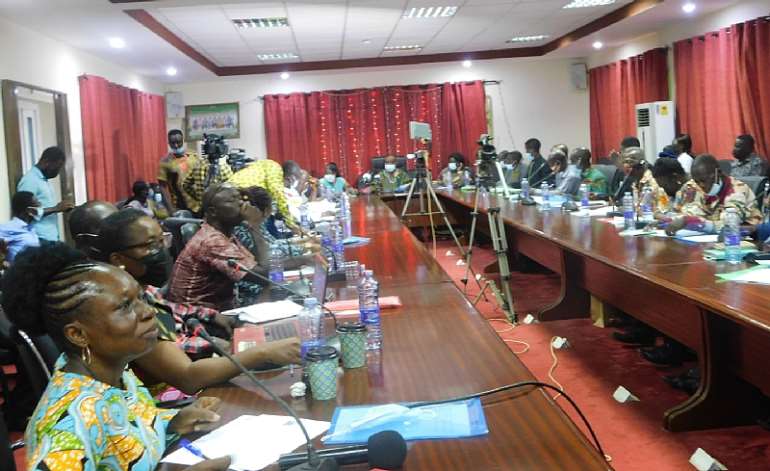 He said such publications not only causes fear and panic among local consumers, but also has the potential to affect the country in international trade.

“It has come to our notice a video circulating on various social media platforms in which a middle-aged man makes a claim that a certain variety of coconut in Ghana contains blood instead of coconut water.”

“Our investigations into the matter revealed that the viral video which has been shared more than 30,000 times on social promotes nothing but falsehood, and we urge the public to disregard it as a hoax.”

He said knowing the implications of such misinformation on the coconut industry, COCOFEG took the matter seriously and made efforts to deal with it, including contacting the international fact-checking organization, Dubawa, who helped to identify the original source of the video– one Emmanuel Afful.

According to an article published on Ghana.dubawa.org on October 8, titled “Viral video showing a ‘mysterious’ coconut with blood in it, fictional” the video creator, Emmanuel Afful admitted that it is not real blood as mentioned in the video and that it was a display of his artistic and creative skills on the social media platform, Tik Tok.

Mr. Boateng said the federation is still reviewing information gathered so far about the matter and might consider legal action against the culprit.

Radio Gold, XYZ, 131 others yet to receive re-authorization letters from NCA – GIBA