A deputy Minister of Power under the erstwhile Mahama administration, John Abdulai Jinapor wants the government to urgently put in place all necessary protocols to ensure a successful take-over of the 250-megawatt (MW) Africa and Middle East Resource Investment (AMERI) thermal power plant by VRA.

Government is to resume ownership of the 250-megawatt (MW) Africa and Middle East Resource Investment (AMERI) thermal power plant from February 1, 2021, per the terms of the deal.

The Dubai based firm arrived in the country in October 2015 to assist in resolving the power crisis at the time. The deal was signed by the government at a total cost of US$510 million on Build, Own, Operate and Transfer (BOOT) basis.

Based on the BOOT terms, the government through the Volta River Authority (VRA) will commence the ownership, operation and maintenance mandate by February 1, 2021. Owing the plant comes with many benefits to the state. It will lead to cheaper thermal power because there will be no capacity charges, increase the country’s power portfolio and VRA’s capacity to tap into the West African market, among others.

Jinapor in a Facebook post on Saturday ahead of the deadline Sunday said the government must ensure it undertakes a seamless process leading to the take-over without further delay.

Conditions for take over

Although AMERI wrote in September 2020 to inform the government of its intention to hand over the plant by the date stated in the contract, the latter is yet to take the necessary steps, according to B&FT sources.

For instance, it is understood that the government has yet to conduct a technical audit to ascertain the integrity of the plant. There has also not been any form of training of VRA staff to man the facility and a memorandum of understanding or roadmap on how to settle an outstanding balance of US$32 million due to the Dubai based energy firm, as of the beginning of January 2021.

Additionally, AMERI wants the government to make full payment for January before the state assumes ownership, but this has not been done yet. “From IES checks, the government has been slow. We have not seen better preparation from government,” says Nana Amoasi VII, Executive Director of Institute for Energy Security (IES), an energy think-tank. 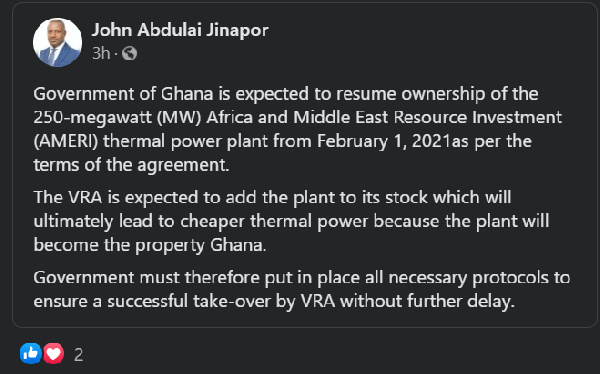 The Ghana Revenue Authority (GRA) on Monday donated GHS50,000 to the Apiate Support Fund to …