The comments of former Minister of Lands and Natural Resources, Alhaji Inusah Fuseini, recommending that his party leaders refrain from ‘renting’ crowds for their rallies and unity walks has courted the displeasure and anger of some party members who have not hesitated to express their sentiments on the issue.

Mr Fuseini told Starr FM’s Bola Ray on StarrChat, Saturday, that it would be important that supporters from a particular region be made to participate in the programs without any additions from any other regions in order to reveal the party’s membership base for that exact area; attributing crowd sourcing to the party’s defeat in the 2016 polls.

“Crowd-sourcing doesn’t give us the real picture on the ground. Looking back, you ask yourself so what happened after Cape Coast, then what happened after Accra, where are all those who filled the stadia or stadium in Accra? So looking back it didn’t give us our real strength, so when we lost disastrously in Accra, that number we saw was not reflected”, he said.

His colleagues, obviously displeased with his comments, accused him of being hypocritical and two-faced in an attempt to remain on the good side of the ruling party.

They had this to say:

“Ever since we got into opposition he’s been trying to play the ‘good cop bad cop’. I sometimes ask myself if he’s got loyalty for NDC”, Mujeeb Tchamuzah queried.

“The NDC got 946,048 in the 2016 Presidential election. The NDC last rally was at Accra sports stadium which can talk a little over 45,000 people. Let us even assume that the place was over-crowded so 60,000 people were at the rally.” Another member, Yayra Koku wrote.

“So on what basis can someone tell me Yayra Koku that NDC rented people?” He added.

“I sincerely disagree with HON Fuseini. Political success is based on the political momentum that the party or individual put up during political events. The HON is not a political novice and must be advice to reorganize his utterances of late. How would you feel as a party Fanatic to see 100 people on the streets in kumasi in the name of NDC. Let’s get serious with our party and stop this hypocrisy from within”, another Member Carlos D Nasanbory wrote. 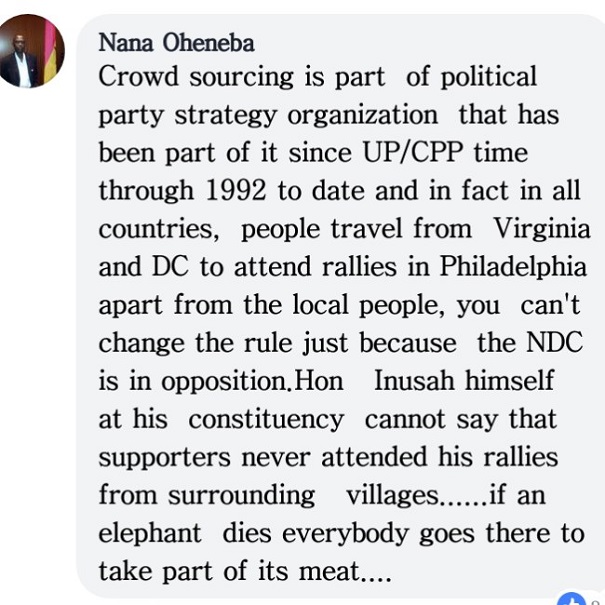 “That man is a hypocrite. I never like him. He always try to please the elephants. So he want to tell us that during the 2016 elections. It’s only his constituents people attended his rallies. Hypocrite and parasite” wrote Ibrahim Namlana.

The NDC has gathered in Kumasi for a Unity Walk, which according to Inusah Fuseini, will be dominated by rented crowds whose number do not represent the strength of the party in the region. 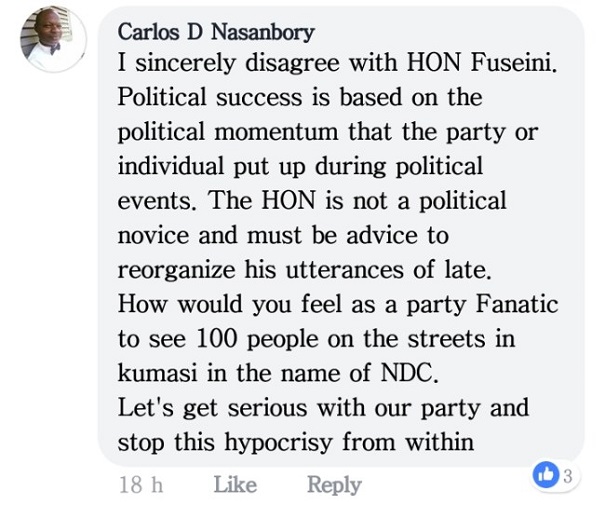 Dr Nkrumah calls on Ghanaians to take stock of achievements