Barely five days ago, the annals of World Football was given a historic turn following the ascension of former Ballon d’Or winner George Oppong Weah to the Presidential seat of Liberia – a feat that has given footballers, both active and retired, a new level of confidence, renewed hope and determination to face the future.

Perhaps, many felt that Weah’s ambitious target of becoming the President of Liberia was just a dream that would disappear like a mirage.

But seasoned Ghanaian sports journalist Ernest Koranteng of Metro TV had predicted Weah’s victory and had gone ahead to address him with the title ‘Your Excellency President George Weah’ in a television interview, two months before the first round of election in October this year.

Ernest is just an experienced journalist despite holding high esteem his religious virtues but what many perceived to be a mere prediction by a journalist has eventually become a prophecy with Weah emerging the eventual winner of the elections in Liberia.

Below is the video of Ernest’s prophetic interview with George Weah: 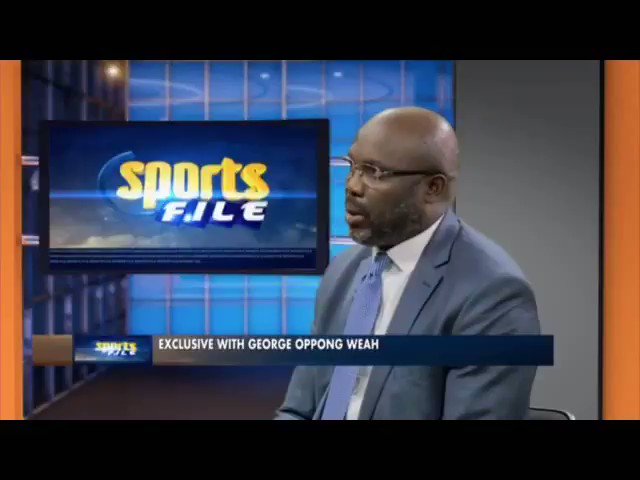 The former AC Milan star was not only determined to become the president of Liberia but was incredibly confident of defeating the incumbent Vice President of the country to the seat.

With the trend of politics in Africa and with Joseph Boakai being the Vice President to Her Excellency Ellen Johnson Sirleaf, many saw the task for George Weah as similar to the story of David and Goliath in the Bible.

It looked almost impossible but Weah was confident, just like David – optimistic of using just a stone to hunt down Goliath – and down Boakai went, defeated.

Weah did not just defeat his opponent Boakai, but mercilessly pulled him through sharp piercing steel to win the election runoff with 61.5% of the votes.

Weah shot himself in the lead, trouncing his opponent with a landslide victory in Tuesday’s second round of voting.

The former World Footballer of the Year swept 13 out of the 15 counties with his 73-year-old opponent Joseph Boakai getting only two counties.

Weah remarkably improved on his showing from the first round of the election where he won 11 out of the 15 counties, catapulting to the emphatic victory to become the new President of Liberia to make history.

Boakai could only win his home county of Lofa and Gbarpolu.

Weah first sought the presidency in 2005 but lost to Johnson Sirleaf in the runoff. That defeat, and his subsequent election to the Liberian Senate in 2014 – representing Montserrado County, the country’s largest senatorial district – has provided him with what he describes as a “valuable learning experience”.

George Weah first sought for the Liberian presidency in 2005, age 39, but he failed. He relentlessly proceeded to obtain his High School Diploma (Equivalent to SSCE in Ghana) in 2006 at the age of 40.

He then won election to the Liberian Senate in 2014, a year after his Master’s Degree and is now the President of Liberia 3 years later.

Isn’t this irreproachably unblemished achievement of the King of the Rectangular surface inspirational enough to get the restore hope of walking in the cripple and give hope to the blind of seeing his love?

Weah’s lack of secular education was a major negative against him in 2005, particularly among the political elite, but as determined as a young guy chasing a high school girl, no turning back.

Both Weah, the candidate for the Congress for Democratic Change (CDC), and Boakai, of the Unity Party, had promised to revive Liberia’s struggling economy and kick start infrastructure projects but it is clear the former footballer will now bear that responsibility.

The prophecy, the confidence, the determination – George Weah is President of Liberia!

The member of Parliament for Tafo Pankorono constituency, Hon. Vincent Ekow Assafuah has taken a swipe at Sammy …